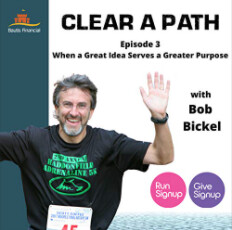 I've been on a couple of Podcasts.  I'm not all that articulate and sometimes stumble over my words, so you may want to put these on 2X...

The Software Agents - "Running race events worldwide were canceled overnight in March. RunSignup founder Bob Bickel explains how the company's DevOps DNA enabled them to survive the sudden shutdown of their core business and create new kinds of events that have kept the running community together and still running."

When a Great Idea Serves a Greater Purpose - "In this Episode of the Clear a Path Podcast we sit down with Bob Bickel, Founder of Run Signup and Give Signup.  Bob started his career in the tech space developing his skills to help numerous companies grow their market value to hundreds of millions.  While embarking on new projects, Bob always had side projects in the running industry where he eventually launched the Run Signup brand and boosted the running scene and road races all over the country.  Along the way, Bob and his team discovered that the Run Signup platform could be expanded to help charitable organizations increase their exposure and fund raising efforts."

The Future is Now - Interview in Authority Magazine - "The thing I find most frustrating is the untapped potential in the world. When I look at the U.S., the disparity in opportunity that many segments of our population face holds our entire country back. If you were born poor, non-white or female, you simply are not playing with the same deck of cards. Education is constrained. Often there is a lack of role models. And there is not a “network” that can help advance a career."

RedLine13 Podcast on TechStrong TV - Review of how RedLine13 was created as an outgrowth of RunSignup. We built our own load testing framework on AWS because all the commercial products were too expensive to test 50,000 people trying to register at the same time. It was so cool, we spun it out a separate company that customers have used to run millions of hours of load tests.